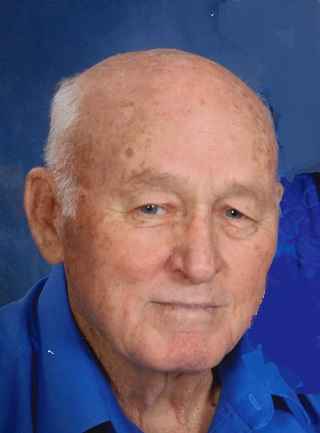 May 5, 1928 – May 7, 2018
Thomas Edward “Doc” Reynolds, 90, of Bedford, died at 12:18 a.m. on Monday, May 07, 2018 at Stonebridge Health Campus.
Born May 5, 1928, in Lawrence Co., he was the son of Chesley and Daisy (Prather) Reynolds. He married Norma J. Myers and she preceded him in death on September 23, 2017. He owned the Marathon station and was a diecast operator and guard at General Motors. He was a veteran of the Merchant Marines and served in Korea during the war. He was a member of Gillen Post #33 American Legion, where he enjoyed playing cards. He enjoyed farming in his spare time and after retirement, hosted many croquet gatherings.
Survivors include a daughter, Linda Pittman and husband, Paul; a son, Lincoln Reynolds and wife, Melanie, all of Bedford; a son-in- law, Jean “Butch” LeJeune, of Bloomington; three grandchildren, Jason Reynolds, of Bedford, Christine LeJeune Mayes and husband, Grant, of Columbus, OH, J.T. LeJeune and companion, Laura Hunsucker, of Bloomington; a brother, Kenny Reynolds, of Kentucky; several nieces and nephews. He was preceded in death by his parents; his wife; a daughter, LeeAnn Reynolds LeJeune; sisters, Alice Raines, Jean Nickless, and Maxine Jackson; a brother, Bob Reynolds.
Funeral services will be conducted at 2 p.m. on Friday, May 11th in the Elmwood Chapel of the Day & Carter Mortuary with Pastor Nathan Sundt officiating. Burial will follow in Green Hill Cemetery, where military rites will be accorded by members of Gillen Post #33 American Legion. Visitation will be from 4 p.m. to 8 p.m. on Thursday, May 10th and from 1 p.m. until the hour of service on Friday, at the Day & Carter Mortuary.
The family asks that friends consider memorial contributions be made to Gillen Post #33 American Legion, 515 ‘X’ Street, Bedford or the White River Humane Society, P.O. Box 792, Bedford.
Family and friends may express condolences at www.daycarter.com.
Larence Franklin (Bud) Kirkman – Springville
December 20, 1936 – May 6, 2018
Larence Franklin (Bud) Kirkman, 81, of Springville, passed away at I.U. Health Bloomington Hospital on Sunday, May 6, 2018.
Born December 20, 1936 in Avoca, he was the son of Orville and Annetta (England) Kirkman. He married Patricia Duncan on July 19, 1957 and she survives. He was a member of the Avoca Baptist Church and the White River Bow Hunters Archery Club. He worked for Ingalls Stone Company before being drafted into the Army where he was a armored personnel carrier driver and coached and played basketball in Germany. When he returned from Germany, he went to work for the Westinghouse Corp. and Asa Brown Bovari (ABB) in Bloomington as a plater and fork lift operator. He retired after 33 years. Bud was an avid outdoorsman who enjoyed fishing with his sons, grandsons, brothers, and wife. He also enjoyed hunting with his family and shooting archery with friends and family. He established the Westinghouse Archery Club and served as it’s president for five years. While his sons were young, he coached basketball and football at the Bedford Boys Club. He was also a volunteer biddy basketball coach at the Needmore Elementary School.
Bud is survived by his wife, Patty; two sons, Steven L Kirkman (Kathleen) and Jonathan P. Kirkman; grandsons, Liam Kirkman and Zachary Kirkman; step-granddaughter, Kaytlynn Klem; adoptive grandsons, Juan and Fernando Kirkman;
step-great granddaughter, Adelinne Klem; sister, Janna Combs; brothers, Denny (Carol) Kirkman, Ross (Jeanie) Kirkman; nephews, Tim (Cleata) Kirkman, Terry Kirkman, Josh Kirkman, Jerry (Jamie) Kirkman; nieces, Julie Hudson, Holly Wiram, Shelly Sheese, Jody Gill, Missy Kirkman; nephew-in- law, Sean Duncan and wife, Laura, niece-in- law, Michelle Duncan; several great nieces and nephews.
He was preceded in death by his parents, a brother, David Kirkman; a niece, Tammi Boudreau.
Visitation will be from 4 p.m. until 8 p.m. on Thursday, May 10th at the Day & Carter Mortuary. Funeral services will be conducted at 11 a.m. on Friday, May 11th in the Elmwood Chapel of the Day & Carter Mortuary with Rev. Ross Kirkman officiating. Burial will follow in Hilltop Cemetery in Avoca where military rites will be accorded by members of Gillen Post #33 American Legion.
Family and friends may express condolences at www.daycarter.com.
Peggy Joyce Froman – Salem
December 25, 1948 – May 6, 2018
Peggy Joyce Froman, 69, of Salem, formerly of Mitchell, passed away Sunday, May 6, 2018, at Meadow View Health and Rehabilitation Center in Salem.
Born December 25, 1948, in Lawrence County, she was the daughter of Clyde Ray and Helen Irene (Simpson) Houchin.
Peggy had been employed by the Kroger Company. She attended the Mitchell Church of the Nazarene and was a loving mother and grandmother who never met a stranger.
Survivors include his daughters, Angela Joy Froman of Campbellsburg, Donna Kay Froman of Mitchell; granddaughter, Chelsey Lynn Froman of Campbellsburg; siblings, Sandra Kay Enfield of Elkhart, Donna Fay Graves of Mitchell, Conrad Jay Houchin of Mitchell, Richard Lee Houchin of Mitchell and Paul Wayne Houchin
Her parents and brother, Ronald Ray Houchin, preceded her in death.
Funeral service will be at 1 p.m. Thursday, May 10, in the Memorial Chapel of Chastain Funeral Home & Cremation Center with Brother Jerry Allen officiating. Burial will be in Mitchell Cemetery. Friends may call from 11 a.m. until the service on Thursday at the funeral home.
Condolences may be sent to the family at www.chastainfuneralhome.com