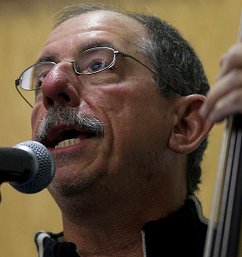 August 19, 1958 – April 22, 2018
Gregory Kent Norman, 59, of Bedford, died Sunday, April 22, 2018 at University Hospital in Indianapolis.
Born August 19, 1958 in Bedford, he was the son of Roy Frederick and Sarah Lou (Bailey) Norman. He married Terra Albietz in May of 1980 and she survives. He spent his life working in the Lawrence County Limestone industry and played in the Not Too Bad Bluegrass Band as well as many other bands in the area.
Survivors include his parents; his wife, Terra, of Bedford; a son, Joe Norman and wife, Jamie, of Bedford; a son-in- law, Eric Everage, of Bedford; four grandchildren, Zoey, Logan, Drew, and James Norman; two brothers and two sisters, Jeff Norman and Kathy Norman, both of Bedford, Shelley Smith and Bob Norman both of Heltonville; his father-in-law, Bob Albietz, of Inglis, FL; his mother-in- law, Jane Mundy, of Shawswick.
He was preceded in death by a daughter, Jennifer Norman Everage. He loved without condition, smiled without effort, and lived without selfishness.
Funeral services will be conducted at 3 p.m. on Thursday, April 26 th in the Elmwood Chapel of the Day & Carter Mortuary with Pastor John Lane officiating. Burial will follow in Gilgal Cemetery. Visitation will be from 11 a.m. until the hour of service on Thursday at the Day & Carter Mortuary.
Family and friends may express condolences at www.daycarter.com.