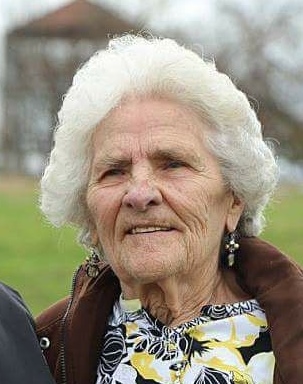 May 29, 1928 – February 13, 2018
Margaret Ann Baker, 89, of Bedford, died Tuesday, February 13, 2018 at I.U. Health Bedford Hospital.
Born May 29, 1928, she was the daughter of Granvel Benton and Eva (Brewer) Harris. She married Chester Junior Baker on December 6, 1946 and he preceded her in death on November 24, 2017 after seventy years of marriage. She was a homemaker and a 4-H Leader for twenty years. Early in life, she was a member of the First Baptist Church for fifty years where she served as a deaconess. She then joined the Leatherwood Church where she was a member for over thirty years. She devoted her life to helping others, family, in church, and her friends and neighbors. She served in many areas of both churches, including women’s groups, nursery, and kitchen help. She was an avid card player, playing in various card groups for many years.
Survivors include four daughters, Cathy (Mike) Allman, of Bedford, Mona (Tim) Wolf, of Cincinnati, OH, Louisa (Mike) Ooley, of Bedford, and Nellie Neal, of Lafayette, IN; ten grandchildren, Greg (Autumn) Allman, Robert (Krystal) Allman, Sara Wolf, Samantha Wolf, Jessica Wolf, Jacob (Jessica) Wolf, Ben Ooley, Chris Ooley, James Neal, and Kay (Tyson) Moore; five great grandchildren, Cason Moore, Bailey Moore, Raegan Moore, Tatum Moore, and Asa Allman; a sister, Kay Johnson of Hartford, KY; a sister-in- law, Nellie Reynolds of Columbus; her caregiver and friend, Ellen Steimel of Bedford.
She was preceded in death by her parents, her husband, and two brothers, Bill Harris and Bob Harris.
Funeral services will be conducted at 2 p.m. on Sunday, February 18th in the Elmwood Chapel of the Day & Carter Mortuary with Sherman Thomas officiating. Burial will follow in Cresthaven Memory Gardens. Visitation will be from 2 p.m. to 6 p.m. on Saturday, February 17th at the Day & Carter Mortuary. The family asks that friends consider memorial contributions be made to the Leatherwood Christian Church.
Family and friends may express condolences at www.daycarter.com.