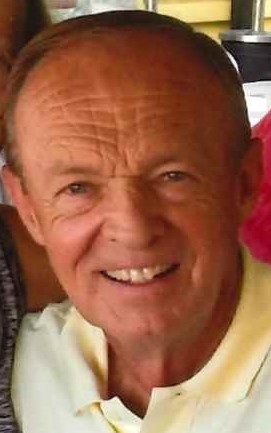 March 21, 1942 – October 12, 2017
Robert Dale “Bob” Hamilton, 75, of Spencer (formerly of Bedford), died Thursday, October 12, 2017 at I.U. Health Bloomington Hospital.
Born March 21, 1942, in Detroit, MI, he was the son of Louie Dale and Eugenia (Saunders)
Hamilton. At the early age of eleven he started his first job of delivering newspapers, then
worked summers painting Needmore School. At I.U., he graduated with a Master’s Degree in
Education. He was a teacher, worked in accounting and bookkeeping and owned businesses in
cleaning and real estate (Hamilton & Associates). Bob was the Senior Vice President of Lending for Monroe County Bank for many years. In retirement, Bob worked for Bell Trace where he continued helping others. He was not only a kind person, but a mentor to many. He taught
Sunday School, was an avid I.U. fan, enjoyed playing golf, hunting, fishing, and bluegrass music.
Survivors include two daughters, Stacey Alysia Hamilton and husband, Mark Berlese, of Brisbane,
QLD Australia and Melissa Dyan Watts and husband, Keith Watts, of Chapel Hill, TN; two
grandchildren, Blaze and Reagan Berlese; three step-children, Tim Johnson and wife Jennifer,
Troy Johnson and wife Eileen, all of Tucson, AZ, Scott Johnson and wife Robyn, of Charlotte, NC;
nine step-grandchildren, Anna Grace, Carly, Alex (and wife Carolyn), Emily, Jacob, Krystian (and
husband Andrew Richie), Mariah, Sygourni, Natasha; one great grandchild (Riley); a sister, Ronda
Mitchell and Gary, of Springville; a brother, Roger Hamilton and Kathy, of Bedford.
He was preceded in death by his parents, and a sister, Sondra Hamilton.
Visitation will be from 2 p.m. to 8 p.m. on Monday, October 16th at the Day & Carter
Mortuary. Funeral services will be conducted at 11 a.m. on Tuesday, October 17th in the Elmwood Chapel of the Day & Carter Mortuary with Scott Johnson officiating. In his service to others, Bob’s
wishes were to donate his body to science. Following the funeral service, his body will be
donated to the I.U. Anatomical Board. Friends are welcome to bring a photo or favorite memory
of Bob to be shared with the family. ‘
Those considering memorial contributions, the family suggests Riley Children’s Foundation
www.rileychildrens.org.
Condolences may be expressed a www.daycarter.com.
Kenneth G. “Kenny” Mitchell – Bedford
January 4, 1944-October 13, 2017
Kenneth G. “Kenny” Mitchell, 73, of Bedford died at 5:30 p.m. Friday, October 13, 2017 at his residence.
Born January 4, 1944 in Bedford, IN he was the son of Ermal and Mildred (Nicholson) Mitchell. He married Thelma Faye Stannard on September 29, 1967. Kenny attended the Hillcrest Christian Church, and was a member of the Bedford Masonic Lodge # 14 F&AM . He retired from General Motors as a tool and die maker.
He is survived by his wife, Faye of Bedford; three daughters: Tammie May and her husband Brad of Bedford, Teresa Guthrie and her husband Troy of Washington, IN, and Terri Birchler and her husband Terry of Columbus, OH; seven grandchildren: Amanda, Kaley, Alex, Rebecca, Mitchell, Mia, and Joe; one great grandson, Alan; one sister, Judy Hostetler and her husband Arch of Boelus, NB.
He was preceded in death by his parents.
Funeral services will be conducted at 11 a.m. on Wednesday, October 18th at the Hillcrest Christian Church with Pastor Charlie Scott officiating. Burial will follow in the Fayetteville Community Cemetery. Visitation will be from 4 p.m. until 8 p.m. on Tuesday, October 17th at the Day & Carter Mortuary. Masonic services will be conducted at 6 p.m. on Tuesday.
In lieu of flowers, the family requests that contributions be made to the Hillcrest Christian Church Building Fund.
Family and friends may express condolences at www.daycarter.com.
Robert E. Sloan – Shoals
Robert E. Sloan, 84, Shoals, passes away on Oct. 1, 2017 at Noon at his home.
He was born on October 27, 1932 in Lawrence County to Lester and Delia Sloan. He attended Mitchell High School, retired from the B&O Railroad and was a veteran of the United States Navy.
He is survived by his daughter, Debbie (Jessy) Blackerby, of Mitchell; a sister Dorothy Sears and a brother Charles Sloan.
He is preceded in death by his parents and sisters Mary Ball and Louise Stepp.
A memorial service will be held at 1 p.m. Wednesday, Oct. 18, 2017 at the Bride of Christ Church in Mitchell with burial in the Mitchell Cemetery. Visitation will be from 11 a.m. until 1 p.m. at the church prior to the service. Pastor Jerry Allen is officiating.
The Queen-Lee Chapel of the Thorne-George Family Funeral Homes is in charge of the arrangements.