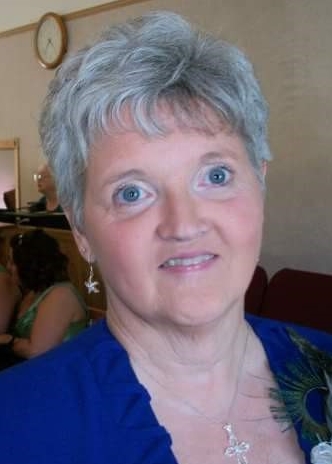 July 1, 1957 – August 29, 2017
Alana Joy Norman, 60, of Bedford, died at 6:47 p.m. on Tuesday, August 29, 2017 at I.U. Health Hospice House in Bloomington.
Born July 1, 1957 in Lawrence Co., she was the daughter of Charles and Jean (Brown) Foddrill. She was previously the second deputy treasurer for Lawrence County and a member of the Leesville United Methodist Church.
Survivors include a daughter, Natasha Hall and husband, Josh, of Leesville; a son, Tyler Norman and wife, Sasha, of Vallonia; four grandchildren, Anala and Indie Hall, Reace and Ruger Norman; her mother, Jean Foddrill of Leesville; two sisters, Sherri Bulleit of Corydon and Denise Bair and husband, John, of Leesville; several nieces and nephews.
She was preceded in death by her father.
Funeral services will be conducted at 10 a.m. on Saturday, September 2nd in the Elmwood Chapel of the Day & Carter Mortuary with Rev. Rob Kirts and Rev. Bill Ireland officiating. Burial will follow in the Leesville Cemetery. Visitation will be from 4 p.m. to 8 p.m. on Friday, September 1st at the Day & Carter Mortuary.
The family asks that friends consider memorial contribution be made to the National Parkinson Foundation.
Family and friends may express condolences at www.daycarter.com.
Bill Arnold – Mitchell
Bill Arnold, of Mitchell, passed away Tuesday evening at his residence.
Funeral arrangements are pending at Chastain Funeral Home & Cremation Center.
Judy A. Brazzel – Bedford

December 9, 1938 – August 29, 2017
Judy A. Brazzel, 78, of Bedford, died Tuesday, August 29, 2017 at I.U. Health Bloomington Hospital.
Born December 9, 1938, in Wabash, IN, she was the daughter of Loarn Dale and Mary Hazel (Radcliff) Nelson.
She married John Brazzel and he preceded her in death. She was a hairdresser for fifty-nine years and spent many
of them at the Cut Hut.
Survivors include a daughter, Debbie Zollman and husband, Donnie, of Mitchell; a son, Darrel (D.G.) Yates, of Bloomington; two grandchildren, Alexis and Alannah Zollman; nieces and nephews, Connie Lowery, Beverly
Harvey and Jimmy Graves.
She was preceded in death by her parents, a brother, DeLorne Nelson; a sister, Mickey Graves and a step-brother, Kenny Graves.
Funeral services will be conducted at 2 p.m. Friday, September 1st in the Elmwood Chapel of the Day & Carter
Mortuary with Peggy Mitchell officiating. Burial will follow at Cresthaven Memory Gardens. Visitation will be from
4 p.m. to 8 p.m. on Thursday, August 31st and from 1 p.m. until the hour of service on Friday at the Day & Carter Mortuary.
The family asks that friends consider memorial contributions be made to the American Cancer Society or St. Vincent de Paul Catholic Church.
Family and friends may express condolences at www.daycarter.com.