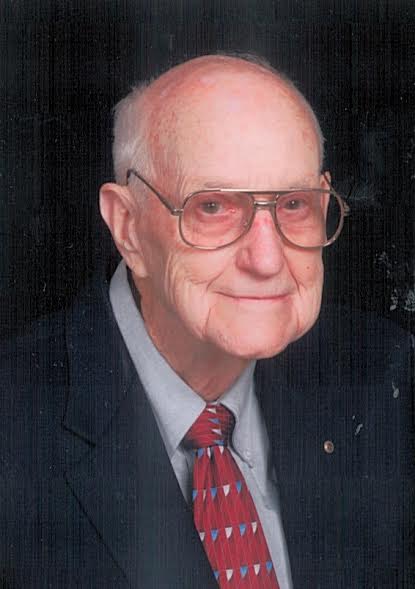 July 10, 1920- October 17, 2016
Bedford – John L. “Jack” Henderson, Jr., 96, of Clarksville, IN, formerly of Bedford, died Monday, October 17, 2016 at Kentuckiana Medical Center in Clarksville.
Born July 10, 1920 in Burnsville, NC, he was the son of John L. and Jessie (Van Arn) Henderson. He married Shirley Houpt on June 29, 1957 and she preceded him in death on August 16, 2016. He was a Lieutenant in the U.S. Navy during WWII, a member of the American Legion Gillen Post 33, an active member of the First Baptist Church, and former President of the Bedford Exchange Club. He was a distributor for Texaco Oil Co. managing Combs Distributing in Bedford.
Survivors include a son, John Henderson and wife, Rebekah, of Brownsburg, IN; two daughters, Sara Kelley and husband, Rick, of Jeffersonville, IN and Jane Rubietta and husband, Rich, of Park Ridge, IL; five grandchildren: Ruthie (Rubietta) Hall and husband, Matt; Zak Rubietta; Collin Hayes and wife, Kristyn; Heather (Henderson) Moyer and husband Alex; and Josh Rubietta; and two great grandchildren, Abby and Esther Hall. He was preceded Esther Hall.
He was preceded in death by his parents and wife.
Funeral services will be conducted at 2 p.m. on Thursday, October 27th in the Elmwood Chapel of the Day and Carter Mortuary with Lee Brown officiating. Burial will follow in Cresthaven Memory Gardens. Visitation will be from 10 a.m. until the hour of service on Thursday at the Day and Carter Mortuary.
Family and friends may express condolences at www.daycarter.com
In lieu of flowers/gifts please consider making a donation to: Westminster Health Care Activities Fund c/o Ricky Moldero, 2210 Greentree N., Clarksville, IN 47129.