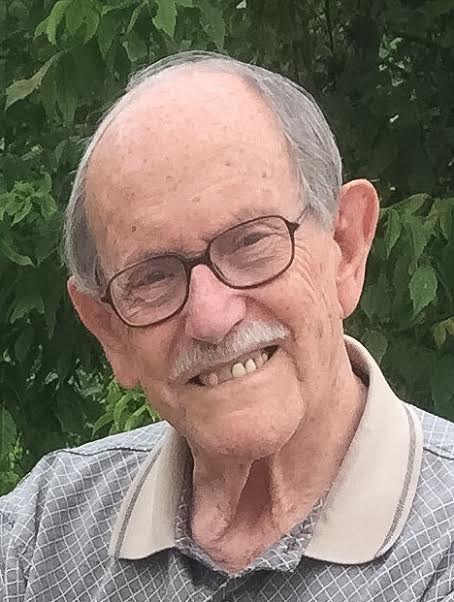 December 24, 1920 – April 28, 2016
Bloomington – James Michael “Mike” Grange, 95, was born December 24, 1920 to William
Hugh Grange and Artie (Sprinkle) Grange of Lawrence County, Illinois.
He graduated from Lawrenceville High School with the class of 1938. He also graduated from Vincennes, Indiana University, Wilmington, Ohio College and Cincinnati Bible Seminary. Mr. Grange taught in Lawrence County schools, he then served as a weather man in the US Air Force during WW II. For sixty-two years he served as a minister for churches in Ohio, Indiana and Michigan.
In 1941, Mr. Grange was married to Roberta Smith who preceded him in death in 1991. Together they had five children, William, of Lincoln, Nebraska; Mary Fay, of Toledo, Ohio, Christina, of Lansing, Michigan; Robbie, of Ann Arbor, Michigan and Shelley, of Okemos, Michigan. Mr. Grange leaves fourteen grandchildren and four great grandchildren.
Mr. Grange was married to Dr. Linette Showerman in 1993. He also has two step-sons, Markand Scott Miller. Mr. Grange also has one sister, Edith Rich of Lawrenceville, Illinois.
Funeral services will be conducted at 11 a.m. on Monday, May 2nd in the Elmwood Chapel of the Day & Carter Mortuary with Lee Brown and Frank Battaglia officiating. Burial will be in Vincennes, Indiana. Visitation will be from 9 a.m. until the hour of service on Monday, May 2nd at the Day & Carter Mortuary.
The family asks that friends consider memorial contributions be made to Hospice.
Family and friends may express condolences at www.daycarter.com.
Howard W. Vaught – Bedford
September 9, 1944 – April 27, 2016
Howard W. Vaught, 71, of Bedford, passed away on Wednesday, April 27, 2016, at his residence.
Born September 9, 1944, in Mitchell, IN, he was the son of George and Dorothy (Burgess) Vaught.
He married Lucy Zigler on April 16, 1965; and she survives.
He was a graduate of Mitchell High School, Class of 1963. Howard worked at Farm Bureau Co-op and Bedford Feed and Seed, where he retired from after 47 years. He was a member of Fairview Community Church and a member of the National Muzzle Loading Rifle Association. Howard enjoyed spending time with his grandchildren and loved working out in his wood shop.
Surviving are his wife, Lucy, of Bedford; two daughters, Stefanie (Don) Lambrecht, of Bedford, and Shawna (Brice) Conner, of Heltonville; four grandchildren, Sarah (Craig) Morehead, of Virginia, Schuyler Lambrecht, of Bedford, Blake Conner, and Sawyer Conner, both of Heltonville; his twin brother, Harold Vaught, of Mitchell; and several nieces, nephews, and cousins.
He was preceded in death by his parents; four brothers, Milton Dean, Gerald Lee, Donald William, and Gordon Dee Vaught; and five sisters, Susan Phyllis Vaught, Winifred June Kern, Pauline Ruth Cox, Jeraline Bonnie Hopkins, and Sharon Kay Campbell.
Funeral service will be on Tuesday, May 3, 2016, at 11 a.m.. at Ferguson-Lee Funeral Home, with Pastor Lindy Hopkins officiating. Friends may call on Monday, from 1 p.m. till 8 p.m. at the funeral home.
Memorial contributions may be made to White River Humane Society, in Memory of Howard W. Vaught.
Online condolences may be sent to the family at www.fergusonlee.com.
James M. Grange – Bloomington
James M. Grange, 95, of Bloomington, died Thursday, April 28, 2016 at his residence.
Arrangements are pending at the Day & Carter Mortuary.