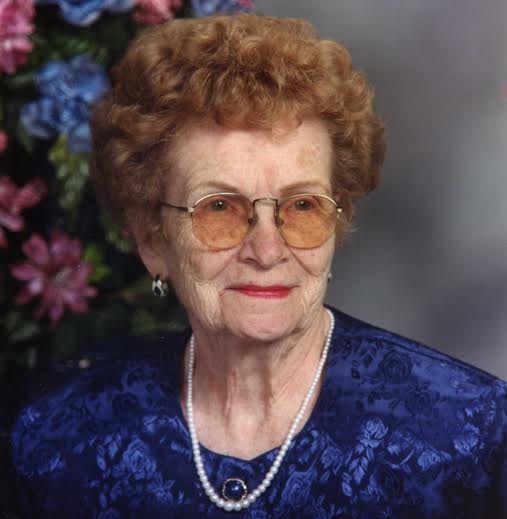 February 5, 1924 – April 17, 2016
Mary Katherine Mathews, 92, of Bedford, died at 12:04 p.m. on Sunday, April 17, 2016 at her son’s residence.
Born February 5, 1924 in Ft. Ritner, Indiana, she was the daughter of Alva and Ella (Beavers) Hobson. She married Cladie A. Bailey on July 4, 1941; he was a Lt. Colonel who was killed in action during WWII while serving in the Philippines on April 20, 1945. She then married Forrest W. Mathews January 19. 1946; he died on July 2, 2009. Mary Katherine was a graduate of Bedford High School class of 1941. She was a Registered Nurse at Dunn Memorial Hospital, retiring in 1991; and had previously worked at RCA, Bloomington, Indiana. She was a 60 Year member at First Baptist Church where she had been a Sunday School Teacher and Deaconess; and a member of the Mitzi Club.
Surviving are her two sons, Mark Mathews of Bedford and Dan (Kristi) Mathews of Bedford; Eight grandchildren, Alyn (Bobbi) Bailey, Traci (Donnie) Prince, Sherri (Tim) Brown, Andy (Christy) Bailey, Melissa (Curt) Alvey, Kye (Sandra) Louden, Colby (Eunjeong) Mathews and Zach Harrison; Seventeen Great Grandchildren; Nine Great -Great Grandchildren; and a special niece, Mary Ann Jenkins.
She was preceded in death by her parents, both husbands, son, Cladie A. Bailey, three sisters, Lois Boling, Mabel Elkins and Faye Keller; brother, Harley Hobson, daughter-in-law, Phyllis Bailey and nephew, Robert Boling.
Funeral service will be on Thursday, April 21, 2016 at 10 a.m. at Ferguson-Lee Funeral Home. Burial will be at Cresthaven Memory Gardens. Friends may call on Wednesday, April 20, 2016 from 4 p.m. till 8 p.m. at the funeral home.
Online condolences may be sent to the family at www.fergusonlee.com.
Rebecca Christine Ritchey – Bedford
November 11, 1930-April 16, 2016
Rebecca Christine Ritchey, 85, of Bedford died at 2:33 am on Saturday, April 16, 2016, at Garden Villa in Bedford.
Born November 11, 1930 in Bedford, IN she was the daughter of Elmer and Winnie (Strunk) Stigall. She married Paul Edward Ritchey on May 25, 1949 and he preceded her in death on June 11, 1996. She was an inspector for the Casting Floor at General Motors retiring in 1988 after 24 years of service. She was a member of New Hope Community Church and the UAW.
Survivors include four sons: Paul David (Cindy) Ritchey of Loogootee, Claude (Janet) Ritchey and Gordon (Michelle) Ritchey all of Bedford, and Mark (Maria) Ritchey of Houston, TX; one daughter: Madonna Gay (Doug) Martin of Ocala, FL; 14 grandchildren: Melinda (Tom) Edwards of Solsberry, Trent (Erin) Ritchey of Chapel Hill, NC, Kristie (Joe) Strauser of Bedford, Jason (Kristin) Ritchey of Kalamazoo, MI, Brian (Amy) Ritchey of Nashville, TN, Joni Ritchey of Nashville, TN, Erin McAlister of Maryland, Neil (Suzanna) Ritchey of New York, Evan Ritchey of San Diego, CA, Isabella, Rebecca, and Matthew Ritchey all of Houston, TX David (Jessica) Martin of Bedford, Jarrod Martin of Charlotte, NC, Barbara (Lloyd) McFadden of Bedford, and several nieces and nephews.
She was preceded in death by her parents, husband, seven brothers: Thomas, Theodore, Ollie, Opal, James, Elmer “Dick”, Frank, and Hayden Stigall; and one great grandson, Jack Edwards.
Funeral services will be conducted at 1 p.m. on Thursday, April 21st in the Elmwood Chapel of the Day & Carter Mortuary. Burial will follow in Patton Hill Cemetery. Visitation will be from 3 p.m. to 8 p.m. on Wednesday, April 20th and from Noon until the hour of service on Thursday, April 21st at the Day & Carter Mortuary.
Family and friends may express condolences at www.daycarter.com.
Lana Kay Fultz Ingle – Williams
February 3, 1947 – April 17, 2016
Lana Kay Fultz Ingle, 69, of Williams, went home to Heaven Sunday, after a lengthy illness. She was born February 3, 1947 in Bedford, to Orin “Bud” and Lenora (Andis) Fultz. She married Donald Ingle who has been her rock for almost 33 years.
Along with Don, she is survived by their children, Mark (Peggy) Ingle, Lori Ingle McDowell, Jeff (Barbara) Ingle, Cherie (Derek) Patton, and Chad (Kim) Robertson; eleven grandchildren and nine great-grandchildren.
Lana graduated Fayetteville High School in 1965. She was an incredible cook and seamstress. She enjoyed all types of crafting especially with her grandchildren and she was an avid bird watcher and photographer. She volunteered many years at Spring Mill State Park. Most of all she will always be remembered for her love of people, she never met a stranger and if you came into her home you were immediately a member of the family.
“Remember me with smiles and laughter for that is how I will remember you all…”
Funeral services will be conducted at 11 a.m. on Wednesday, April 20th in the Elmwood Chapel of the Day & Carter Mortuary with Pastor Charlie Scott officiating. Burial will follow in Old Union Cemetery. Visitation will be from 4 p.m. to 8 p.m. on Tuesday, April 19th at the Day & Carter Mortuary.
Family and friends may express condolences at www.daycarter.com.