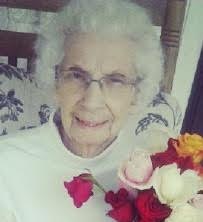 March 14, 1920 – December 4, 2015
Margaret A. Flynn, 95, of Oolitic, died at 7:25 am on Friday, December 04, 2015 at her residence. Born March 14, 1920 in Burnside, KY, she was the daughter of LeeAnder and Beulah (Bennett) Hollars. She married Fred R. Flynn, Sr. on December 9, 1938 and he preceded her in death. She retired as an inspector for RCA in Bloomington and was a member of I.B.E.W. for thirty years. She was a member of the Oolitic Pentecostal Church.
Survivors include a daughter, Barbara J. Lake, of Oolitic; two sons, Phil Flynn and wife, Darcy of Harrodsburg, Russ Flynn and wife, Jennie of Bedford; twelve grandchildren, Lisha, Kelly, Michele, Mindi, Zachary, Seth, Brittney, Mary Jo, Peggy, Bobby, Penny and Faron; seventeen great grandchildren; thirteen great great grandchildren; a sister, Lena Covey of Kokomo; many nieces and nephews.
She was preceded in death by her husband, her parents, a grandson, Philip Shayne; four brothers, Ed, Andy, Otis, Orville (Doc) Hollars and a sister, Elizabeth New.
Funeral services will be conducted at Noon on Monday, December 7th in the Elmwood Chapel of the Day & Carter Mortuary with B.D. Sutherland and Marty Speer officiating. Burial will follow in Hilltop Cemetery. Visitation will be from 1 pm to 5 pm on Sunday, December 6th and from 11 am until the hour of service on Monday, December 7th at the Day & Carter Mortuary.
Family and friends may express condolences at www.daycarter.com.
Walter H. Wilson – Bedford
July 28, 1921 – November 24, 2015
Walter H. Wilson, 94, of Bedford, formerly of Naples, FL, died at 11:24 am on Tuesday, November 24, 2015 at Bliss Place in Bedford.
Born July 28, 1921 in Anderson, IN, he was the son of Chester Wilson and Ethel (Grant) Wilson. He married Marjorie Cue on November 27, 1943 and she survives. He was a mechanical engineer for Delco in Kokomo, IN. He was a member of the Anderson Masonic Lodge.
Survivors include his wife, Marjorie, of Bedford; two sons, Richard Wilson and wife, Mary Ann, of Kokomo, Randall Wilson and wife, Tami, of Bedford; five grandchildren, Tyler, Tara, Jay, Brooke and Megan Wilson.
Visitation will be from 5 pm to 7 pm on Friday, December4th in the Elmwood Chapel of the Day & Carter Mortuary. No services are planned. Burial will be in Sunset Memory Gardens in Kokomo, IN.
Family and friends may express condolences at www.daycarter.com.