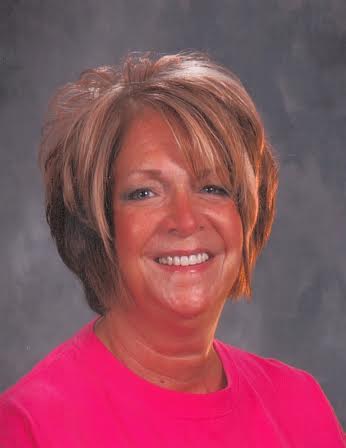 March 18, 1957 – October 28, 2015
Cindy Goodin, 58, of Bedford, died at 11:25 am on Wednesday, October 28, 2015 at her residence.
Born March 18, 1957 in Lawrence Co., she was the daughter of William “Bill” and Mary (Shaff) Mattox and they survive. She married Tim Goodin on April 26, 1980 and he survives. She was a kitchen manager for Bedford North Lawrence High School and a member of the St. Vincent de Paul Catholic Church. She loved camping, vacationing at the beach, spending time with her husband and grandchildren, cooking and cake decorating.
Survivors include her husband, Tim, of Bedford; two daughters, Kami Bush and husband, Alan, of Bedford, Malynda Fields and husband, Derek, of Bloomington; a son, Matt Goodin of Bedford; three grandchildren, Elizabeth Bush, Aden and Samuel Fields; mother and father, Bill and Mary Mattox; two sisters, Diane Jost and husband, Mark and Kathi Thomas and husband, Scott, all of Bedford; two sisters-in-law, Mary Fish and husband, Bob and Susan Parker and husband, David, all of Bedford; three brothers-in-law, Michael Goodin and wife, Bonnie of Nashville, IN, George Goodin and wife, Dina, and Pat Goodin and wife, Cathy, all of Bedford; several nieces and nephews.
She was preceded in death by a son, Reid Goodin; grandmother, Grace Elizabeth Shaff; sister-in-law, Martha Hudson; father and mother-in-law, Edgar and Kathryn Goodin.
Funeral services will be conducted at 9:30 am on Saturday, October 31st at the St. Vincent de Paul Catholic Church with Father Rick Eldred and Deacon Dave Reising officiating. Burial will follow in Cresthaven Memory Gardens. Visitation will be from 4 p.m. till 8 p.m. on Friday, October 30th at the Day & Carter Mortuary.
Family and friends may express condolences at www.daycarter.com.
Elmer Cletus Tedrow – Shoals
March 5, 1931 – October 27, 2015
Elmer Cletus Tedrow, 84, Shoals, passed away on Tuesday, October 27, 2015 at the memorial Hospital and Healthcare Center in Jasper.
Born March 5, 1931 in Alfordsville, Indiana he was the son of the late Edgar and Dortha (Witt) Tedrow. Cletus was previously employed by Lindsey’s Ford Tractor Sales, Monon Railroad Company and he retried from his greatest joy woodworking. He was a lifelong Martin County dairy and grain farmer. He attended Martin County Schools and was a member of the Fraternal Order of Eagles #2442.
He is survived by his children Connie Benson, of Salem, Cheryl and Tim Beyers, of Shoals, Rick and Ronda Tedrow, of Dubois, Mark and Renee Tedrow of Shoals, Bob and Vicky Tedrow of Shoals, Brian and Susan Tedrow of Shoals; 11 grandchildren and 14 great grandchildren; sister Dorothy “Midge” Collins, of Shoals.
He was preceded in death by his parents, two sisters Eva Feller and Mary Montgomery and brothers Paul, Marion and Kenny Tedrow.
Visitation will be from 2 p.m. until 6 p.m. on Sunday, November 1, 2015 at the Queen-Lee Funeral Home in Shoals. The funeral will be held at 11 am. on Monday at the funeral home. Burial will follow in Pleasant Valley Cemetery.
Condolences may be made to the family at www.queenlee.com