William C. “Bill” Silvers – Bedford
June 7, 1932 – July 22, 2015
William C. “Bill” Silvers, 83, of Bedford, died at 5:19 pm on Wednesday, July 22, 2015 at Methodist Hospital in Indianapolis.
Born June 7, 1932 in Illinois, he was the son of William “Willie” and Bobbie (Cole) Silvers. He married Margaret Grant and she preceded him in death. He graduated from Pottsville High School in Pennsylvania, with the class of 1950. He graduated with a degree in journalism from Penn State.
Bill was the news director at radio station WBIW in Bedford, retiring after forty years. Following his retirement, he worked in the mayor’s office under Mayor John Williams for several years. He was a member of the Bedford Boat & Sportsman’s Club, a past president of the Bedford Public Library Board and a member of the Parks
Department Board. He was an avid golf enthusiast.
Survivors include a daughter, Leslie White and husband, Jeff, of Bedford; a brother, Ronald Silvers, of Oolitic.
He was preceded in death by his parents and wife.
At Bill’s request, there are no services scheduled.
Arrangements are under the direction of the Day & Carter Mortuary.
Family and friends may express condolences at www.daycarter.com.
Claude E. Cobb – Moresville 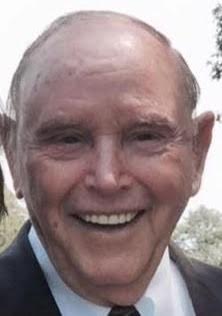 February 8, 1928 – July 22, 2015
Claude E. Cobb, 87, of Mooresville, formerly of Bedford, died at 5:39 pm on Wednesday, July 22, 2015 at Community Hospital South in Indianapolis.
Born February 8, 1928 in Lawrence Co., he was the son of Henry and Ollie (Childers) Cobb. He married Barbara Nikirk on August 31, 1950 and she survives. He was an ordained minister with the Pentecostal Church of God. He pastored churches in Newark, IN, Bedford, IN, Battle Creek, MI, Oak Grove in Springville, IN and at Bethel Faith Temple in Indianapolis for twenty-two years until his retirement. He was the first Youth Director of the Indiana District Pentecostal Church of God then served as Superintendent. He was a veteran serving with the U.S. Army and a member of American Legion Post #0777 of Indianapolis.
Survivors include his wife, Barbara, of Mooresville; a daughter, Brenda Cochran and husband, Sherrill W., of Dallas, TX; two sons, Denny Cobb and wife, Phylis, of Springfield, MO and Benny Cobb and wife, René of Mooresville, IN; eight grandchildren; seven great grandchildren; two sisters, Marie Fields and husband, Carl, of Florida and Maggie Jones and husband, Raymond, of Bedford; several nieces and nephews.
He was preceded in death by his parents and six siblings.
Funeral services will be conducted at 2 p.m. on Saturday, July 25th at Hilltop Pentecostal Church in Avoca with Denny Cobb and Thomas Branham officiating. Burial will follow in Hilltop Cemetery with military rites accorded at the graveside by members of Gillen Post #33 American Legion and D.A.V. Chapter 2. Visitation will be from 4 p.m. till 8 p.m. on Friday, July 24th at the Day & Carter Mortuary.
Family and friends may express condolences at www.daycarter.com.