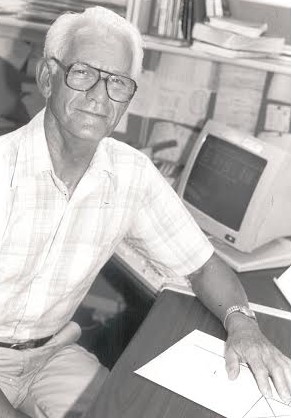 June 24, 1926 -July 21, 2015
Bedford – Jack L. Young, 89, of Bedford, died at 8:25 p.m. on Tuesday, July 21, 2015 at Stonebridge Health Campus.
Born June 24, 1926 in Oolitic, he was the son of David and Blanche (George) Young. He was preceded in death by his first wife, Wilma Soards who was the mother of his children. He married Lucille M. Wilkinson on March 4, 1997 and she preceded him in death. He was a graduate of Greene’s Barber College in Detroit, MI, a graduate of Highland Park Junior College in Highland Park, MI and a graduate of Baptist Bible College in Springfield, MO. He was a signalman in the U.S. Navy and served in WWII. He was a member of the Bedford Masonic Lodge #14 F & AM where he had served as a past Master. He was an associate editor and reporter for the Times-Mail. He had been an E.M.T. for Dunn Memorial Hospital a C.P.R. trainer/instructor for the American Red Cross and a member of the Grace United Methodist Church.
Survivors include three daughters, Jacqueline Carra (Robert) of FL, JoAnn Hall (Cliff) of Greenwood and Donna
Deckard (Roger) of Bedford; two sons, David Young (Kym) of Salem and Kevin Young (Lucy) of Bedford;; thirteen grandchildren and several great grandchildren.
He was preceded in death by his parents; three brothers, David Andrew (in infancy), George Young and Richard Young; a sister, Evelyn Kruse.
Funeral services will be conducted at 11 a.m. on Saturday, July 25th in the Elmwood Chapel of the Day & Carter Mortuary with Dan Goens officiating. Burial will follow in the Green Hill Cemetery with military rites. Visitation will be from 4 p.m. to 8 p.m. on Friday, July 24th at the Day & Carter Mortuary.
Family and friends may express condolences at www.daycarter.com.