Florence M. Childers – Bedford
Florence M. Childers, 85, of Bedford, died at 8 p.m. on Sunday, May 10, 2015 at Westview ASC Bedford.
Born May 15, 1929 in Lawrence Co., she was the daughter of Henry and Frances M. (Brinegar) Chasteen. She married James Winferd Childers on January 28, 1948 and he preceded her in death on May 4, 1960 as the result of a bulldozer accident. She was a graduate of Needmore High School with the class of 1947 where she was class secretary. She was a seventy-two year member of the Hilltop Pentecostal Church and served as the Sunday School Secretary for over thirty years. She was a cook at Needmore High School from 1967 to 1978. She later worked for Bedford National Bank and Bank One retiring after fifteen and one-half years. She returned to work part time at Stone City Bank. Her ambition was to compile her own cookbook. She completed and published “Recipes From Many Years” in 2000.
Survivors include five children, Shirley (Joe) Spain, of Fultondale, AL, David (Shirley) Childers, of Lehigh Acres, FL, Carol Sue Franklin, of Oolitic, Sherry Childers, of Bedford and Jon (Kathy) Childers, of Noblesville, IN; eight grandchildren, Nancy Woody Mason, Lenae Spain Simpson, Tangie Franklin Jenkins, Jim Childers, Sandy Franklin Burnette, Tiffany Spain Phillips, Heather Childers Whitaker and Amanda Childers Leahy; eleven great grandchildren, Jesse and Luke Woody, Brittney Jenkins, Macee and Mylee Burnette, Sam and Will Phillips, Koy and Broc Whitaker, Robbie and Molly Leahy; three step-great grandchildren, Austin and Dylan Corbin and Danlee Simpson; one step great great granddaughter, Carlie Corbin and a special nephew who was like one of her own, Shannon Childers of Bedford; a sister, Wilma Charles of Bedford; two sisters-in-law, Marcella (Childers) Pancoast of Flint, MI and Neva Childers of Bedford; several nieces and nephews.
She was preceded in death by her parents, her husband, Winferd, a son-in-law, Jon Franklin; a grandson, Jim Bob Franklin; four brothers, John, Joe, Jim and Marshall Chasteen; five sisters, Mary Patton, Thelma Sullivan, Edna Jackson, Marjorie Reeves and Dorothy Kirkman.
Funeral services will be conducted at 10 a.m. on Friday, May 15th at the Hilltop Pentecostal Church with Rev. Bill Johnson, Bro. Bennie Sutherland and Bro. Kevin Maberry officiating. Burial will follow in Hilltop Cemetery. Visitation will be from 2 p.m. until 8 p.m. on Thursday, May 14th at the Day & Carter Mortuary and from 9 a.m. until the hour of service on Friday, May 15th at the Hilltop Pentecostal Church.
Family and friends may express condolences at www.daycarter.com.
Barbara J. Taylor Krodel – Bedford
Barbara J. Taylor Krodel, 78, of Bedford, died Sunday, May 10, 2015, at Garden Villa, Bedford.
Born July 29, 1936, in Lawrence Co., she was the daughter of Charles McMahan and Eva (Patton) McMahan.
She married Norman Taylor in 1950; he died in 1980.
She was a homemaker and member of Christ Temple Pentecostal Church, Bedford.
Surviving are three daughters, Connie (Larry) Neeley, Bonnie Hirtz and and Reva Albertson, all of Bedford; and one son, Jackie Taylor, of Michigan; five grandchildren, Nathan, Crystal, Shannon, Melanie and Jacklyn; eleven great grandchildren; four sisters, Patty Henderson and Mary Hall, both of Bedford, Jolene Fruits, Springville and Judy; and one brother, Ronnie McMahan, California.
She was preceded in death by her parents; her husband; one brother, Charles Everett McMahan; and one sister, Bonnie, in infancy.
Graveside services will be held at 11 a.m. Thursday, May 14, 2015, at Patton Hill Cemetery. There will be no visitation hours. Services are under the direction of Ferguson-Lee Funeral Home, Bedford.
Online condolences may be sent to the family at www.ferusonlee.com.
Hale L. Hall – Bradenton, Florida 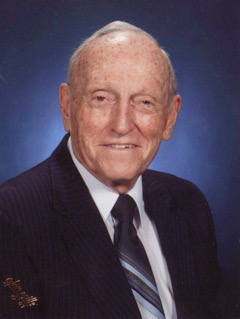 Hale L. Hall, 89, of Brandenton Florida, passed away at Tidewell Hospice in Bradenton, Florida, on Wednesday, May 6, at 8:15 p.m.
Born on May 25, 1925, in Shoals, Indiana, Hale was the son of Harley and Sally (Thompson) Hall. He grew up on farms in and around Williams, graduating from Williams School. He proudly served his country during W.W.II as a Signalman in the U.S. Navy. He married Jane Richards in September 1948, and shared 25 happy years together with her until her death in 1973. Hale farmed with his father in Williams and later in Fayetteville. His primary career as an accountant culminated with over 20 years at Tropicana Products in Bradenton, Florida. He held a variety of positions with other companies following his retirement from Tropicana and was still employed at BMO Harris Bank in Bradenton in February of this year. Hale has been a member of the West Bradenton Baptist Church for the past 40 years.
Hale is survived by his daughter Elaine Morse, and her husband Andrew of Atlanta, Georgia, as well as beloved sisters- and brothers-in-law, nieces and nephews in Indiana.
He was preceded in death by his wife Jane, his parents and two siblings, Herbert Hall and sister Ruth (Hall) Reeves.
Funeral services will be conducted at 10 a.m. on Thursday, May 14, 2015, at the Day & Carter Mortuary in Bedford. Burial will follow at Cresthaven Memory Gardens Cemetery. Visitation will be held on Wednesday, May 13 from 5 p.m. till 8 p.m. at the Day & Carter Mortuary.