Jack Edward Reynolds – Mitchell
Jack Edward Reynolds, 75, passed away Tuesday, July 21, 2014, at Mitchell Manor Living and Rehabilitation Center.
Funeral arrangements are pending at Chastain Funeral Home & Cremation Center.
Neil Richard Kelly – Bedford
Neil Richard Kelly, 72, of Bedford, died at 8:17 pm on Sunday, July 20, 2014 at his residence.
Born March 31, 1942 in Lawrence Co., he was the son of George Richard and Anna Bernice (Meadows) Kelly. He
married Donna Michael on May 28, 1988 and she survives. He was a plasterer.
Survivors include his wife, Donna of Bedford; three children, Jami Bechner and husband, Scott, of Bedford, Lori LaMarche of French Lick and companion, Bob Grissom, Todd Kelly and wife, Leanne, of Bedford; four grandchildren, Katie Landstrom and husband, Zach, Taylor Kelly, Allegra Kelly and Ellie Kelly; one great grandchild,
Vaida Jane; a brother, Jim Kelly of Bedford.
He was preceded in death by his parents.
Graveside services will be conducted at 10 am on Wednesday, July 23rd at Hanson Cemetery with Pastors Mike and Jeff Williams officiating.
The family asks that friends consider memorial contributions be made to Riley Hospital for Children or the American Cancer Society.
Family and friends are invited to sign the guest book and light a candle in memory of Neil at www.daycarter.com.
Patricia “Criss” Durham Eipers – Shoals
Patricia “Criss” Durham Eipers, 59, of Shoals, passed away at Memorial Hospital & Healthcare Center on Saturday, July 19, 2014.
She was born in Henderson, KY to Roy Estel and Eva Carlene (Hill) Durham. Criss retired as a dietary cook from the Evansville State Hospital, she was a great cook and passed down her “killer meatloaf recipe” to her daughters. She furthered her education through VUJC in paralegal studies and was the family go to for family legal matters. Criss loved gardening and she was a talented seamstress. She was of the Christian Faith.
Survivors include daughters Gina Richelle Grafton, of Loogootee, Lisa Renae (Josh) Greene, of Shoals; one grandson, Colin Riley Grafton; two granddaughters Brooklyn Emily and Alexis Jordan Greene; four brothers Robert Estle, of Evansville, Edward Ray, of TN., Norman Lee, of Evansville and Roy Bart, of Evansville; seven sisters Carrie Mae Marquez, of CA, Connie Louise Soliman, of Evansville, Doris June Tinkle, of Shoals, Joyce Ann Goldberry, of Shoals, Lora Faye Goldsberry, of KY, Frances Earlene Beal, of Shoals and Victoria Jean Sanders, of Loogootee, numerous nieces, nephews and cousins.
She was preceded in death by her parents and a brother John Sumner Durham.
Visitation will be from 4 p.m. to 8 p.m. on Tuesday, July 22, 2014 at the Queen-Lee Funeral Home in Shoals. Funeral services will be at 11 a.m. on Wednesday, July 23, 2014 at the funeral home. Burial will follow in Spring Hill Cemetery in Shoals.
Condolences may be made to the family at www.queenlee.com
Ruth Arnold – Mitchell 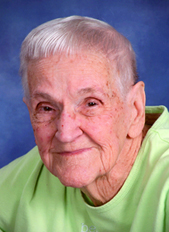 Ruth Arnold, 96, surrounded by her family, passed away at 10:01 p.m. Sunday, July 20, 2014, at her residence.
Born May 11, 1918, in Mitchell, she was the daughter of Harley J. and Dovie Mae (Bass) Alexander. She married Edwin Franklin “Frank” Arnold May 11, 1938, and he preceded her in death, December 28, 1975.
She had been employed at Trav-Ler Radio Corporation and retired from Mitchell Manor Living and Rehabilitation Center where she was a member of the Ladies Auxiliary. Ruth graduated from Mitchell High School in 1937 and was a member of the First Baptist Church. She was a member of several bowling leagues.
Survivors include her children Jerry (Pat) Arnold, Mitchell, Constance “Connie” (Dean) Terry, Mitchell, Becky (Danny) Mounce, Mitchell, Tony (Barbara) Arnold, Bedford; 15 grandchildren; 32 great grandchildren; 11 great great greatchildren; sister, Dorotha Nave, Lexington, Kentucky.
Her parents; husband; siblings, Robert Alexander, Lucille Alexander, and Helen Henderson; and great grandson, Brayden Modglin, preceded her in death.
Funeral service will be at 11 a.m. Thursday, July 24, in the Memorial Chapel of Chastain Funeral Home & Cremation Center with Brother Dave Norris officiating. Burial will be in Burton Cemetery. Friends may call from 5 p.m. to 8 p.m. Wednesday and from 10 a.m. until the service on Thursday at the funeral home.
Condolences may be sent to the family at www.chastainfuneralhome.com
Joyce Anne Hardwick – Springville
Joyce Anne Hardwick, 54, of Springville, died Friday, July 18, 2014 at her residence.
Born January 20, 1960 in Bedford, she was the daughter of Michael Dorsett and Betty Holmes Dorsett. She married Kevin Hardwick on July 1, 1997 and he survives. She was a homemaker and member of the Living Water Church of God in Mitchell.
Survivors include her husband, Kevin, of Springville; her parents; a daughter, Kendra Anne Wilkins and husband, Jan, of Indianapolis; a son, Kyle Sneed and wife, April, of Paoli; a step-daughter, Amber Hardwick of Indianapolis; grandchildren, Michael Wilkins, Rachel Wilkins, Danielle Wilkins, Karl Snead and Lilly Sneed; a sister, Julie Knight of Bedford; two nephews, Brandon Asbury and Christopher Knight.
She was preceded in death by her father, Carl Robbins; grandparents, John and Nellie Robbins, Quince and Dorothy Holmes and her dear friend, Louise McCool.
Funeral services will be conducted at 11 am on Wednesday, July 23rd in the Elmwood Chapel of the Day & Carter Mortuary with Bro. Ray Jones officiating. Burial will follow in the Lowder Cemetery. Visitation will be from 4 pm to 8 pm on Tuesday, July 22nd at the Day & Carter Mortuary.
Family and friends are invited to sign the guest book and light a candle in memory of Joyce at www.daycarter.com.