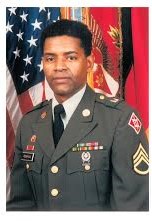 De’Armand Penman, 59, of Bedford, died at 6:38 pm on Friday, July 4, 2014 at St. Vincent Dunn Hospital in Bedford.
Born January 24, 1955 in Indianapolis, he was the son of Bobby Penman and P. Saabirah Ahmad.He married Queen Penman and she survives. He was a veteran of the U.S. Army, retiring after twenty years of service. He was a key custodian at NWSC Crane. He attended First Assembly of God Church of God and Meadows Community Church.
Survivors include his wife, Queen, of Bedford; a daughter, Ryan Penman; a son, De’Armand Penman, II and wife, Keia Penman; two grandsons, Zion and Jaedyn Snorten; two granddaughters, Iyanna Penman and Armani Penman; siblings, Carmen McNeal and wife, Rose, Bradley McNeal, Khadijah Omar, Khalimah Marcelle and husband, Paul, Khawailah Ahmad, Patrinah Ahmad-Bennett, Tysha Ahmad, Na’imah Ahmad, Sulaiman Ahmad and wife, Millcent; step-siblings, Thurmond Smith, Chrita Smith and Abdul Ahmad.
He was preceded in death by his foster parents, John and Erie Morris and a step-sibling, Senitha Cunningham.
Funeral services will be conducted at 11 am on Saturday, July 12th at Crown Hill Cemetery Chapel in Indianapolis with Pastor Bill McKee officiating. Burial will follow in Crown Hill Cemetery. Visitation will be from 6 pm to 8 pm on Friday, July 11th at the Day & Carter Mortuary.
Family and friends are invited to sign the guest book and light a candle in memory of Dearmand at www.daycarter.com.
at the Day &
Rev. James R. Stevens – Bedford
Rev. James R. Stevens, 92, of Bedford, died at 12:20 am on Wednesday, July 09, 2014 at Stonebridge Health Campus in Bedford.
Born July 17, 1921 in Lawrence Co., he was the son of William Everett and Suzie Elvira (Weir) Stevens. He married Mary Alice Staggs on August 26, 1940 and she preceded him in death on September 20, 2010.
He was a Physical Security Specialist at NWSC Crane for fifty-four years. Upon his retirement, he received the Sagamore of the Wabash among many other prestigious awards.
He was a member of The ALOA Security Professionals Assoc. and the last surviving plank holder at NWSC Crane as well as having a street named for him there.
He pastored the Heltonville Baptist Church and other community churches for over seventy years. He started God’s Store House through Sharing God’s Gifts Ministries where he provided financial and spiritual support to the community.
His purpose for serving God was fulfilled in part by the witness of praying hands lapel pins, which could be observed wherever he had been. His hobby was raising miniature horses.
Survivors include a son, James Stevens and wife, Diane, of Bedford; three daughters, Connie Johnson and husband, Willard, Bonnie Meadows and Sonja Wilson and husband, Dave, all of Bedford; eight grandchildren, Scott Johnson, Wes Johnson, Mary Miljat, Bob Meadows, Chris Meadows, Stacey Meadows, Dusty and Brad Wilson; eleven great grandchildren; two great great grandchildren; a brother, Paul Stevens and wife, Sue, of Bedford; a sister, Violet Cummings of Bedford; several nieces and nephews.
He was preceded in death by his parents, his wife, a son-in-law, Dale Meadows; two brothers, Ralph and Johnny and other siblings (in infancy); a brother-in-law, Harold Cummings.
Funeral services will be conducted at 2 pm on Sunday, July 13th in the Elmwood Chapel at the Day & Carter Mortuary. Burial will follow in Leatherwood Christian Cemetery. Visitation will be from 1 pm to 6 pm on Saturday, July 12th and from 1 p.m. until the hour of service on Sunday, July 13th
In lieu of flowers, friends may make donations to “Blessings In A Backpack” in his memory.
Family and friends are invited to sign the guest book and light a memory candle at www.daycarter.com.