David Coffin – Bedford
David Coffin, 62 of Bedford, passed away on Monday, February 24, 2014 at 12:48 p.m. at IU Health Bloomington Hospital.
He was born on February 22, 1952 in Lawton, Oklahoma to Maynard Coffin and Martha Jane (Griffin) Coffin; He graduated high school in Lubbock, Texas. David married Julie Schweisberger Coffin on July 15, 1978 in Lubbock, Texas and she survives.
David was a truck driver for Celadon, and an US Army Veteran, also was a member of Vietnam Vets Motorcycle Club.
Survivors include his wife Julie Coffin, of Bedford; one daughter Kristina Coffin, of Bedford; two sons Jeremy Coffin and Steven Coffin, both of Bedford; his siblings; Stephen (Barbara) Coffin of Texas, Michael Coffin of Texas, Debi (James) Roxer of Georgia, Cathleen (Keith) Palmer of Texas, Maynard (Darlene) Coffin, Jr. of Texas, & Bill Coffin of Texas
He was preceded in death by his daughter; Crystal Coffin in 1988
Memorial Service will be held on Thursday, February 27, 2014 at the Mitchell Church of the Nazarene, at Third Street and Grissom Avenue. Friends may call at the church from 5 p.m. until service time at 7 p.m. on Thursday.
Cresthaven Funeral Home is in charge of arrangements.
Shirley A. Belcher – Shoals
Shirley A. Belcher, 76, of Shoals, went to her heavenly home on February 24, 2014 at 5:53 a.m. at the Memorial Hospital and Healthcare Center in Jasper.
Shirley was born in Martin County, on August 8, 1937 to Frank and Carrie (Walton) Grafton. She married Coveyville G. Belcher on New Years Day 1956 at the United Methodist Church in Shoals.
Shirley graduated from Shoals High School. She worked as secretary at Laverne Terry Ford Town and as clerk for the Martin County License Branch. She was recently employed at Chastain’s Flowers in Shoals. She was a member of the Loogootee Christian Church and served on the board of the Martin County Council on Aging.
She was a talented crafter and loved making fleece blankets for friends and family. She deeply loved her family and most conversations with Shirley involved laughing and sharing stories about her grandchildren.
She is survived by her husband of 58 years, Coy G. Belcher, of Shoals; one son Darrin and whife Melody Belcher, of Batavia, Ohio; two daughters Sandra and husband Roger Wraley, of Shoals and Leanna and husband Jim Potts, of Shoals; grandchildren Jasmine and Jared Sheetz, Taylor Belcher, Clayton Belcher, Brynnae Belcher and James Pott; one great grandson Xander Sheets.
She was preceded in death by her parents; two sisters Kathleen Killon and Doris Gardner, three brothers Dale, Winston and Ralph Grafton.
Visitation will be from 4 p.m. to 8 p.m. on Thursday, February 27, 2014 at the Queen-Lee Funeral Home in Shoals. A funeral service will be held on Friday at 11 a.m. at the Loogootee Christian Church. Viewing will be held on Friday from 10 a.m. until the hour of service at the church. Burial will follow in Spring Hill Cemetery.
Condolences can be made to the family at www.queenlee.com
Hollace D. Chastain – Orleans
Hollace D. Chastain, 76, passed away at 1:24 p.m. Monday, February 24, 2014, at Indiana University Health Bedford Hosptial.
Born June 21, 1937, in Orange County, he was the son of Harold and Faye L. (McPherson) Chastain. He married Loraine Miller October 28, 1960.
He was an Indiana State Trooper from 1966-1992 and spent ten years as the “top cop” at the Indiana State Fair Girls School. He was a farmer, Lawrence County Weights and Measures Officer for five years, and served on the Dunn Memorial Hospital Board. Hollace was a 50 year member of Masonic Lodge No. 228 F&AM and Scottish Rite Valley of Indianapolis. He was a member of the First Baptist Church, the Indiana National Guard, and a Mitchell High School graduate, Class of 1955.
Survivors include his wife Loraine Chastain, Orleans; children, Dr. Hollace D. Chastain II and wife Kelly, Fort Wayne, Greg Chastain and wife Jill, Mitchell, Rachelle Collins and husband, Michael, Orleans; grandchildren Jacob and Michaela Collins Raelynn and Chase Chastain Zachary and Sarah Chastain; brother, Ronald B. Chastain and wife Diana, McCordsville
His parents preceded him in death.
Funeral service will be at 11 a.m. Saturday, March 1, at the First Baptist Church, Mitchell, with Reverend Reggie Clark and Brother Michael Collins officiating. Burial will be in Mitchell Cemetery.Friends may call from 2 p.m. to 7 p.m. Friday at Chastain Funeral Home & Cremation Center and from 10 a.m. until the service on Saturday at the church.
Casketbearers: Indiana State Police Motor Carrier Division
Memorial Gifts: American Heart Association
Condolences may be sent to the family at www.chastainfuneralhome.com
Patricia B. Pearson – Bedford
Patricia B. Pearson, 87, of Bedford, passed away Monday. Funeral arrangements will be announced later by Ferguson-Lee Funeral Home.
Jerry L. Denbo – French Lick 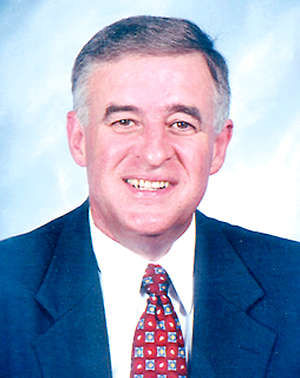 Jerry L. Denbo, 63, of French Lick passed away on Monday at his residence.
He was born on April 24, 1950, in Bedford to Hollis and Carol (Fisher) Denbo.
He was preceded in death by his parents, father Hollis in 1993 and mother Carol in 2010; and one brother Jimmy in 2007.
Jerry graduated with the Springs Valley High School Class of 1968, graduated from Indiana University in 1972 with a Master’s Degree in Education, taught school at the West Washington High School from 1972-1973 and Springs Valley High School from 1973-1979 and served as State Representative for District 62 from 1990-2007.
In between teaching and being a State Representative, Jerry sold insurance for Prudential Insurance Company.
He was a member of the First Baptist Church in West Baden Springs and also attended the Christian Church of Jasper in Jasper. He was also a member of Newton Stewart Lodge No. 432 F&AM.
He is survived by one son, Rob Denbo (Stacy) of French Lick; one daughter, Marcy Greger (Bob) of French Lick; one sister, Gail Harris (Bill) of West Baden Springs; and five grandchildren.
Funeral service will be at 11 a.m. on Thursday at the Brosmer-Kemple Funeral Home, 9640 W. State Road 56, French Lick with Darrell Land, Bud Kielhorn and Jim Tritle officiating. Burial will follow in the Ames Chapel Cemetery in French Lick. Friends may call from noon to 8 p.m. on Wednesday and from 10 a.m. until the service on Wednesday at the Brosmer-Kemple Funeral Home.
In lieu of flowers, the family requests that memorial contributions be made to the First Baptist Church of West Baden Springs, C/O Brosmer-Kemple Funeral Home.
Condolences may be made on Facebook at Brosmer-Kemple Funeral Home or at www.brosmer-kemplefuneralhome.com.
Marvin Long – Bedford
Marvin Long, 75, of Bedford, died at 11:55 pm on Sunday, February 23, 2014 at his residence.
Born January 25, 1939 in Richmond, KY, he was the son of Pauline Proctor. He was a newspaper carrier for the Times-Mail.
No services are scheduled. Cremation was chosen.
Arrangements are under the direction of the Day & Carter Mortuary.