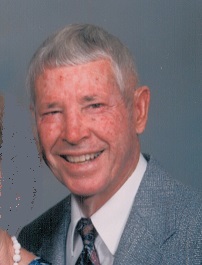 Walter Frederick Manning, 87, of Bedford, died at 4:45 am on Tuesday, January 14, 2014 at Stonebridge Health Campus.
Born December 2, 1926 in Norfolk, VA, he was the son of Robert and Marguerite (Nixon) Manning. He married Dorotha (Dottie) Hinkle on September 3, 1950 and she died June 24, 2010. He retired as a sales representative for Prudential Insurance and was a veteran of the U.S. Army, Merchant Marines and National Guard. He was a long-time member of the First Christian Church in Bedford.
Survivors include a daughter, Connie Pierce and husband, Mark of Lexington, KY; two grandsons, Michael Pierce and wife, Merrytt of Lexington, KY and Daniel Pierce of Elizabethtown, KY; two great grandchildren, Diana Lucille (Lucy) Pierce and Frederick (Freddie) Michael Pierce; two brothers, Robert Manning and wife, Floretta of Odon and Gene Manning and wife, Terry of Bedford and several nieces and nephews.
In addition to his wife, he was preceded in death by his parents and three sisters – Bessie Manning, Mildred (Kay) Marshall and Lois Flynn.
Funeral services will be conducted at 3 pm on Saturday, January 18th at the First Christian Church in Bedford with Pastor Alan Cloar officiating. Burial will follow in Beech Grove Cemetery where military rites will be accorded at the graveside by members of Gillen Post #33 American Legion and D.A.V. Chapter 2. Visitation will be from 5 pm to 8 pm on Friday, January 17th at the Day & Carter Mortuary and from 2 pm until the hour of service on Saturday, January 18th at the First Christian Church.
The family asks that friends consider memorial contributions be made to the Alzheimer’s Association.
Family and friends are invited to sign the guest book and light a candle in memory of Walter at www.daycarter.com.
Betty Beaver Turner – Bedford
Betty Beaver Turner went home to her Lord on January 14, 2014.
Betty was born in Williams, IN on January 8, 1931 to Steve and Madge (Watterson) Gray. Upon her father’s death, she was adopted by her aunt and uncle Ruth (Gray) and James Dwight Allen.
She married Frank L. Beaver on June 27, 1949 and he passed away on December 10, 1968. Betty married Harold G. Turner on June 14, 1977 and he survives. She also is survived by three sons, Steven (Robin) Beaver, G.L. “Dude” (Jill) Beaver, and John Beaver all of Bedford. Also, surviving are two daughters Cathy (Bradley) Ray of Fishers, IN and Carol McCombs of Marlborough, MA. She has had to leave behind her beloved grandchildren Kyle (Becky) Beaver of Forest Hills, NY; Haley Beaver, Indianapolis, IN; Carly Ray and Sam Ray of Fishers, IN, and Kevin McCombs and Katherine McCombs of Marlborough, MA. Betty also had five step-children Linda (Perry) Buff of Greenwood, IN; Brian (Pam) Turner of Franklin, IN; Loren (Hanelore) Turner of Greenwood, IN; Valerie (Dennis) Daniels of Indianapolis, IN; and Cassel (Michelle) Turner of Waldron, IN. Also, she had 14 step-grandchildren and 11 step-great grandchildren. Betty was preceded in death by her parents, two brothers Joe and Donald Gray, and sister Ruth Ann Murray.
Betty was educated in the Bedford School System and was a 1949 graduate of Bedford High School. She was a dedicated and long time member of Hillcrest Christian Church. She enjoyed Bible Studies and serving the Church in any way she could. She enjoyed spending time with and helping her many friends and loved meeting with the 49 Club. Betty was totally devoted to her family and friends and was truly “Mother to the World.” Blessed with a green thumb, she loved gardening and working with plants. She was an avid reader and loved working crossword puzzles. She will be sorely missed by family, friends and anybody that was fortunate enough to meet her.
Visitation will be held for Betty on Friday, January 17, 2014, from 4 – 8pm. Her services will be held on Saturday, January 18, 2014, at 11 am. Pastor Charlie Scott, Hillcrest Christian Church, will conduct the services and Senior Pastor Mark Fugate, Hillcrest Christian Church, will perform some special music in Betty’s honor. Private burial services at Pinhook to take place at a later date. In lieu of flowers, the family is requesting that donations be made to Hillcrest Christian Church or the Bedford Boys’ and Girls’ Club.
Michael H. Allen – Bedford

Michael H. Allen, 42 of Bedford, passed away on Friday January 10, 2014 at his home in Bedford. He was born in Lawrence County on May 14, 1971 to Michael D. Allen & Pamela Sue (Peavler) Anderson. He was a graduate of BNL High School in 1990 and attended ITT Technical College in Indianapolis. He was employed in Lawn care with CCC.
Survivors include his mother and step-father Pam and Darrell Anderson, of Springville; his children Chloe Anderson, of Lawrence County, Cory Allen, of Gas City, Colton Allen, of Lawrence County and Cullen Allen, of Lawrence County; one sister Keri Troutman and husband Scott, of Carmel; 1 granddaughter Cailyn Allen, of Muncie; several nieces and nephews
Michael was preceded in death by his daughter Chesney Allen, his father Michael D. Allen, his grandparents Holly Peavler, Corinne Peavler, Walter Allen, and Alma Allen Wever
Michael adored his children and mourned the loss of his daughter
Memorial services will be held at 1 p.m. on Saturday January 18, 2014 at Cresthaven Funeral Home in Bedford. Friends may call from 11 a.m. until service time at 1 p.m. on Saturday, January 18, 2014 at Cresthaven Funeral Home.
Timothy J. Stapp – Bloomfield
Timothy J. Stapp, 64, of Bloomfield, died at 7:15 am on Tuesday, January 14, 2014 at his residence.
Born August 11, 1949 in Bedford, he was the son of James W and Jean (Mundy) Stapp. He married Janett Haley on June 1, 1968 and she survives. He was a finance analyst at NWSC Crane and attended Owensburg Baptist Church. He was a veteran of the U.S. Navy serving during the Viet Nam War.
Survivors include his wife, Janett of Bloomfield; a brother, Scott H. Stapp of Tucson, AZ; an uncle, Frank Stapp of Savannah, GA; several nieces and nephews and great nieces and nephews.
Memorial services will be conducted at 6 pm on Friday, January 17th in the Elmwood Chapel of the Day & Carter Mortuary with Pastors Jay Collins and Kenny Adams officiating. Visitation will be from 3 pm until the hour of service on Friday, January 17th at the Day & Carter Mortuary.
The family asks that friends consider memorial contributions be made to the Owensburg Baptist Church.
Family and friends are invited to sign the guest book and light a candle in memory of Tim at www.daycarter.com.